THIS is a book you might not encounter. It was published by a Harvard professor towards the end of a distinguished career in academe and government. Don’t be put off by the title. US foreign policy has a lot to teach leaders about leadership. It’s easy to read and it started as a series of lectures.

It’s not to underestimate charisma either. Presidents don’t get elected without some ability to fill what the charismatic (but not specially successful) Teddy Roosevelt famously called the presidential “bully pulpit”. Roosevelt and Reagan were good public performers. But in the cool light of day, lasting foreign policy achievements were not made by the presidents people probably remember best —FDR, Kennedy, Nixon (despite China), Reagan and Obama. They were made by three who performed in a lower key.

Harry S. Truman was a neglected vice-president, who got the top job only because FD Roosevelt died in office. Despite his obscure origins, his lack of qualifications and his chronic lack of money, he learned on the job with dazzling success. It was he who shaped postwar international politics.

His Republican successor, Dwight D. Eisenhower, carried the policy forward through a challenging time. His wartime experience gave him excellent international contacts, an ability to delegate and a general’s willingness to take decisions. (He once told some atom bomb advocates at the time of Korea, “You boys must be crazy: we can’t use those awful things against Asians for the second time in less than 10 years.”)

Professor Nye’s personal favourite is George Bush senior. A former head of the CIA, he managed the demolition of the Berlin Wall and its fallout with quiet skill and without visible gloating. He wins plaudits where his religious but more rhetorically-inclined son does not.

Curiously, though, behind them stands the figure of Woodrow Wilson. His realistic understanding of the world, America’s position in it, and the failings of human nature were not appreciated at the time (the same is true of Truman): but Wilson presaged American success in the decades to come.

Finding new leaders is tricky. If packaging triumphs over content, everyone suffers: comms departments, please take note. The basic question is, How long a game are you prepared to play? —or more realistically, How long a game will stakeholders allow you to play? Professor Nye gives no easy solution. But he is in no doubt: careful thought will always beat bombast in the medium term and certainly the long run. And it’s unwise to pin too much hope on having good luck. 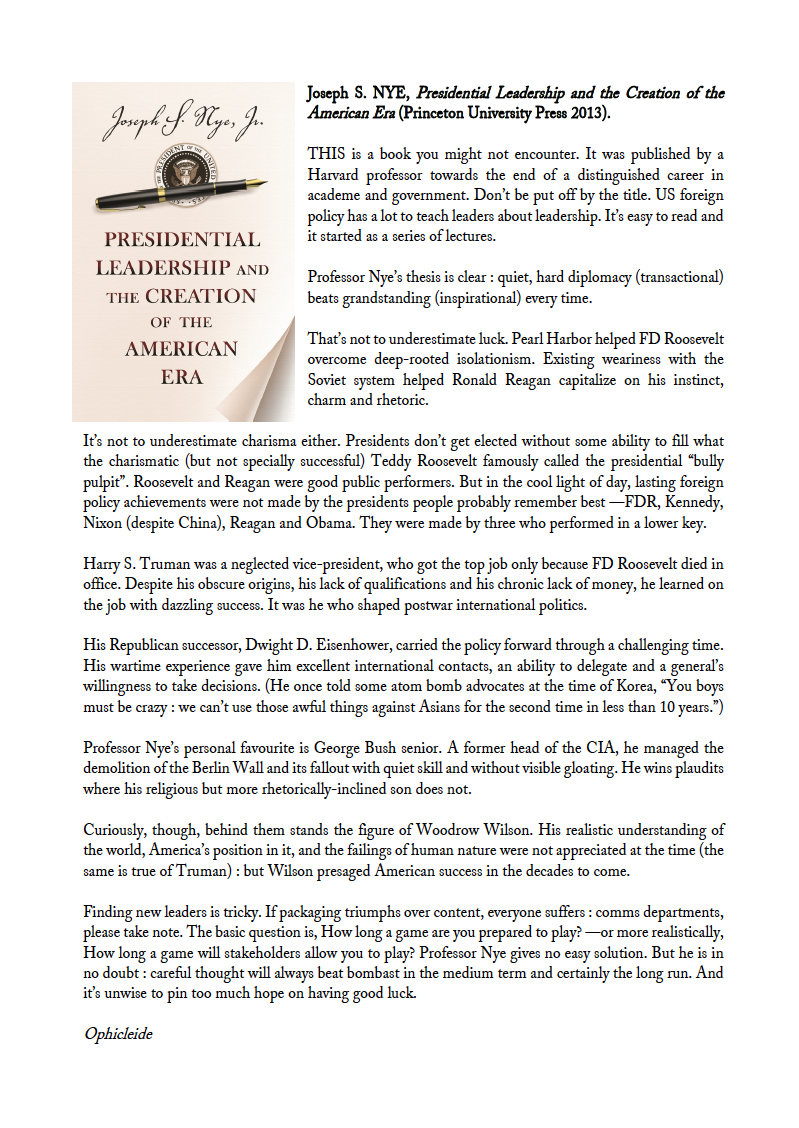