Life as a therapy dog in training… by Tracey Thompson, owner of Ollie the Therapy Dog.

Ollie came into his forever home with us August 2017, he was 10 weeks old. Neither of us had had a dog before; we were complete novices, but we had had cats and naively thought we could ‘do this – no problem’. (You can all laugh now).

The idea was that he would come with me into the counselling room as a therapy dog. Ollie is a cockapoo – cocker spaniel mixed with poodle – traits of a cockapoo in case you don’t know:

Known as ‘velcro’ dogs due to their clinginess

Can bark when left alone and can suffer from separation anxiety

The first 4 months with him were a steep learning curve into what not to do with a puppy. He was very easy to train but this meant that he also learned bad habits easily too! He wouldn’t be left on his own, he chased the poor cats, he found his bark and would follow me everywhere I went around the house. We humanised him, didn’t create any boundaries/zones – he basically was in charge! However, in the therapy room he was perfect, he was empathic, he behaved, he didn’t bark and when there were tears and I couldn’t touch the client, he stepped in and was the cuddle they needed at that time. I started to notice the attachment that was being built in the room between clients and him and was aware of the power of therapy animals.

Outside of the therapy room was very different; he ran off, wouldn’t come back, he barked at everything, he chased the cats and I was at my wits end. Despite a lot of puppy training I felt like a complete failure and turned to an amazing trainer: Kim Philpott who has been working with me for the past 6 months to re-balance him outside of the room.

Kim is a dog behaviourist and dog trainer working in the Epsom area, has worked with a lot of ‘death row’ dogs, dogs labelled as ‘difficult’ and uses dog psychology alongside human psychology to help balance out high energy dogs with unwanted behaviour.

First off it was ball detox. Naïvely we had encouraged his addiction to chasing a ball and we couldn’t leave the house without one. This meant that walks were tense if we lost a ball (he was still very much in charge), he would bark and shout at us to find a new one and he wouldn’t engage with other dogs or nature around him. The first time we went out with Kim she told us: ‘no ball!’. With trepidation we headed into Nonsuch Park with him and bore the full brunt of his anger with us when a ball didn’t emerge. I can still remember how bad I felt! Within 20 minutes of being told no and walking off though he stopped barking and started sniffing and searching and with amazement we spent the next half an hour walking quietly with him running back to us when called, and no ball! This success still stays with me today; he no longer barks at all when we get into the park, he engages and plays with other dogs and has a good sniffing time! Walks are no longer stressful (apart from the poo rolling), they are enjoyable, he comes back every time with a whistle and a treat and when he does find a ball it’s like Christmas for him! We felt back in charge and he was very happy to fall into his role of ‘dog’.

The effect of this on him in the therapy room is that he settles far quicker, within a minute now. If a child brings a ball out, he can sit and wait as he is supposed to and not try to grab it. Just this one success changed our whole world with him, and we know for him he has much nicer and more enjoyable walks. He started behaving in a far more balanced way.

How to stop the chasing of the cats and the being left though? That’s what we are working on with Kim now.

You can find more out about Kim via her website: http://www.dog-talk.co.uk/ 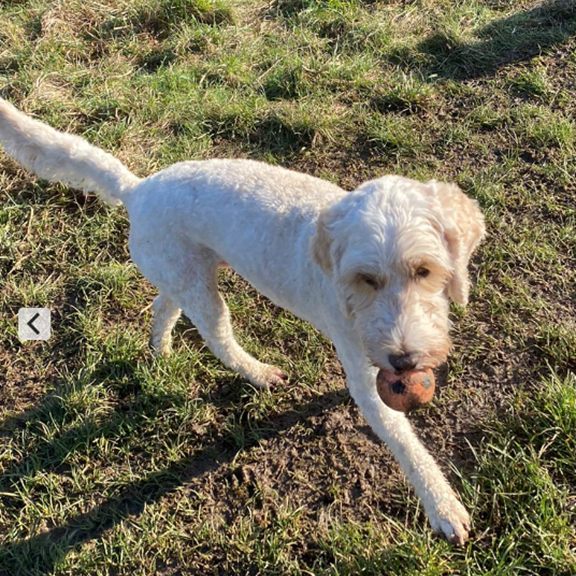