Ashoka Mody’s book has received a great deal of praise. It narrates how the euro came into being and how it has developed. The thesis is clear: too much was expected of it, far too little prudence attended its birth, and after two decades there are far too many glaring flaws. The aims of France and of Germany turn out to have been diametrically opposed. Rhetoric cannot bridge the gap between vision and reality. The euro is more than money: it is an item of faith.

The USA, where Dr Mody is based, and Europe are different entities. The USA from the start spoke a common language, had a common currency, and its civil war ended in 1865. Europe’s history is far longer, its cultural differences very deep-seated, and it has seen two appalling conflicts in the last hundred years; there is much more to overcome and to co-ordinate. The crisis of social democracy, the alienation of the less wealthy and the rise of nationalist populism are also having their effect.

Dr Mody contrasts the Fed’s quantitative easing programme with the eurozone’s (particularly Germany’s) preference for accountability. His prognosis for Greece is therefore dark, and for Italy even darker. For either country to leave the eurozone would, he fears, cause a global catastrophe. Yet the imbalance between the eurozone’s north and south cannot go on. Perhaps the Germans could be persuaded leave the euro instead — it would be healthier all round if they did. But will they?

It is not a pretty story, and despite the non-technical style it is not an easy one to follow. The book follows a narrative pattern, and though the author never loses his thread through the wood, there are many trees for the general reader to encounter: a shorter and more analytical book would have been easier to read. The sources are overwhelmingly anglophone, which is also a pity: yet the author can hardly be blamed for not trawling the literature of all nineteen euro members. Being an economist rather than an historian, he gives little historical context: a reference to, for instance, his compatriot Liaquat Ahamed’s book Lords of Finance would have helped explain a good deal about the tensions in the background.

The book went to press in January 2018, well before the pandemic struck. A further test of the European ideal (and of the euro) has now emerged. Should grants, or should loans, be given to the suffering economies of the EU? On what basis should they be allocated, and by whom? The debate has begun and the result will affect everyone. Neither Brexiter nor Bremainer will have any reason to feel either detachment or schadenfreude, for Dr Mody is sure there will be fallout.

If you have time, this is a volume you should certainly read. Its lessons apply to us all. 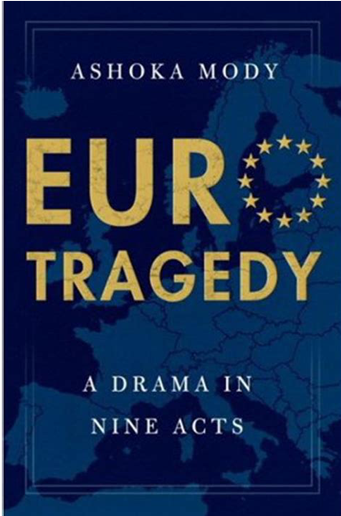