Lionel BARBER, The Powerful and the Damned : private diaries in turbulent times

Lionel Barber has recently retired after fifteen successful years as editor of the Financial Times. This is a chronology of how it all came to pass. It is not a tome of management advice. Rather, it is a thoroughly readable and very entertaining journey through the world’s glittering halls of fame, punctuated with frequent snapshots of the internationally and domestically great and sometimes not so good, followed up pithy summaries of how they struck this personable and gifted journalist.

We learn that Vladimir Putin can play Chopsticks to make a deadpan comparison between Moscow and St Petersburg. We learn that, in the author’s opinion at least, Barak Obama might have been more at ease on the Supreme Court : though Mr Obama’s wickedly shrewd characterization of Messrs Blair, Brown and Cameron suggests he might have been wasted there. Apparently one of the unknown pitfalls of being summoned to meet VIPs on their own turf is going to the wrong entrance (three times) ; less surprising is having to wait for hours for the VIP to show up (much more often).

Most of the usual suspects make an appearance. But for all the constant travel, often with his clearly supportive wife, Mr Barber’s emotional centre is the FT’s London headquarters. His life would have been impossible without the excellent team he inherited, augmented, nurtured and even transformed. An interesting thread is the frequency, even at an earliest stages, of outstanding female colleagues. There is nothing stale, pale and male about the FT’s talent pool.

One of his last interviews as editor was with Angela Merkel, whose time as Bundeskanzler roughly corresponds with Mr Barber’s time at the FT. The book ends with the sombre feeling that an era is coming or has come to its end —politically, ideologically and of course virologically (if such a word exists). That is less the case at the FT than in many spheres. From the very outset Mr Barber could see the way the digital wind was blowing. He successfully made it his business to transfer the paper’s weight online, whilst keeping the traditional form as a vital backup : there were a million digital subscribers by 2020. Whatever the failure of pundits in other respects and elsewhere, here Mr Barber certainly read the runes correctly.

It is almost impossible in a book of this sort to avoid the trap of appearing, as someone once said about a different book, the hero of every encounter. But Mr Barber is not afraid to record the lost opportunities, the dropped balls and the miscalculations. He repeats a very unkind personal criticism made in a rival newspaper, and an even more moving act of generosity received from the same source years later. He has also given us a book that is genuinely enthralling, one that you can put down when you have to and then easily pick up again. But you really don’t want to it put down at all. He leaves it to the reader how to interpret the book’s title. 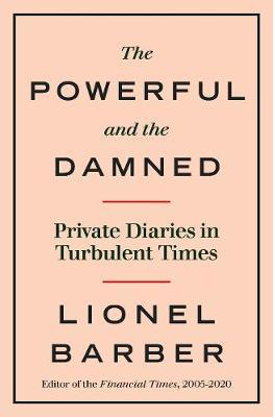