The latest KPMG and REC, UK Report on Jobs survey signalled a renewed upturn in hiring activity in August as more parts of the economy reopened following the coronavirus disease 2019 (COVID-19) outbreak. Although permanent placements rose only slightly, temp billings expanded at the quickest rate for 20 months.

The availability of candidates meanwhile rose at the second-steepest rate in over two-decades of data collection amid reports of widespread redundancies. At the same time, vacancy trends remained subdued, with overall demand for staff falling further in August. Consequently, recruiters signalled further drops in starting salaries and temp wages.

The report is compiled by IHS Markit from responses to questionnaires sent to a panel of around 400 UK recruitment and employment consultancies. 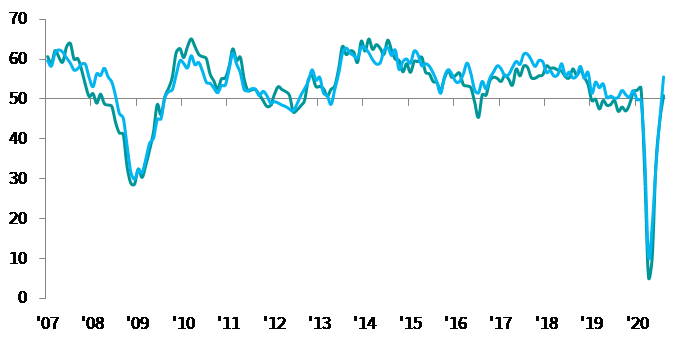 Recruitment activity picks up in August

August's survey showed a renewed increase in hiring activity following the relaxation of public health measures and reopening of the UK economy after the coronavirus disease 2019 (COVID-19) outbreak. Permanent placements rose only marginally overall, but temp billings expanded at the steepest rate since December 2018.

The overall availability of workers continued to expand at a historically sharp rate in August. Notably, the rate of growth was the second-sharpest on record (after December 2008). Recruiters frequently mentioned that company lay-offs had raised candidate numbers, with both permanent and temporary worker supply rising markedly.

Recruiters indicated that increased worker availability and muted demand for staff continued to weigh on starting pay in August. However, both starting salaries and temporary wages declined at weaker rates compared with those seen in the previous four months.

All monitored English regions bar London recorded higher temp billings in August. The steepest increase was seen in the South of England.

Private sector vacancy trends diverged in August, with a solid rise in demand for temporary workers contrasting with a further fall in permanent vacancies. Demand for staff continued to decline across the public sector. The reduction in permanent vacancies was much quicker than that seen for short-term roles.

Temporary vacancies increased across three of the ten monitored sectors during August, with Blue Collar seeing the strongest rate of expansion. Meanwhile, Executive/Professional and Retail saw the quickest falls in demand for short-term staff.

“A return to growth on permanent placements and temporary billings is good news – though it is also expected, given we are comparing activity now with the lockdown. Temporary work is critical in any recovery - businesses turn to temps to help them ramp up and meet demand while the future looks uncertain. At the same time, it enables people to find work quickly. Past recessions show that temporary work bounces back more quickly – it is one of our jobs market’s biggest strengths and that’s really showing now.

“Slower growth in permanent staff appointments is concerning. It reflects the uncertainty businesses face about what will happen over coming months with the pandemic and Brexit. Government can take action to address this – by focussing on getting a trade deal in place and supporting businesses to keep people employed. A reduction to employers’ National Insurance Contributions, and greater flexibility on skills support would both help firms to maintain jobs and hire more people.”

“It’s positive to see an uptick in hiring activity, particularly for temporary staff, which could mark a turning point with businesses appearing more willing and able to hire as more parts of the UK economy reopen.

“But with total candidate availability rising at a near-record pace, strong and sustained rises are needed to move the UK jobs market back to levels seen pre-COVID – and with concerns around a possible second wave of infections, the winding down of the furlough scheme and a Brexit deal outcome, there are still many challenges ahead.

“This paves the way for government to not only provide short-term support but also to offer jobseekers the means to retrain and upskill, helping the recovery in jobs and reviving the UK’s productivity growth.”